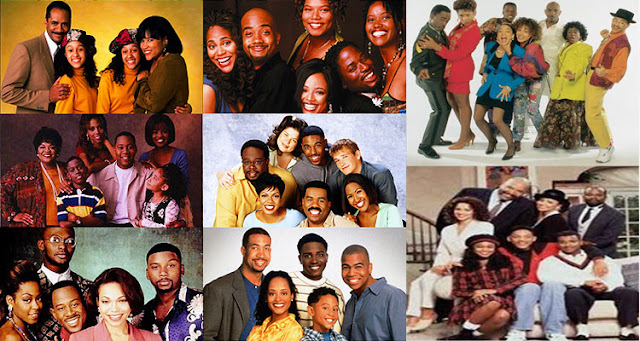 What has happened to black television? In the beginning it could be argued that actresses like, Hattie McDaniel played stereotypical roles to make a way for blacks on the big screen but what's our excuse today? The origins of African Americans in film wasn't pretty most parts were that of mammies, thieves,dim witted men and women, servants and jesters. These roles were prevalent at this time and were literally the only roles black actors could get. Many felt it was better to play the role of a maid or butler than to actually be one.

In the 80's and 90's we had an emergence of shows showcasing African Americans in a different light. Alright folks, put on your thinking caps sometimes it hard to remember with the onslaught on coonery and buffoonery we have displayed presently but i'll give you a minute to flash "black" in time. Remember shows like, The Cosby Show, Martin,Good Times, Living Single & A Different World. These shows actually showed us as people in real loving relationships, friendships and as hard working entrepreneurs . They showed black characters that had goals in life like seeking higher education in order to be successful productive people. These shows proved they could still be funny and do well (by the ratings system) without showcasing black and brown folk in a stereotypical light. Now here's the question, what happened?

Let's jump forward 2017 what shows do our children have to watch today? What shows are we watching? I'm not going to lie its hard not to watch some of the shows we have today simply because even if you know someone's acting a fool it feels good to see someone that looks like you on television. With that being said where are the positive black men and women? No more James Evans or Cliff Huxtable all we see represented are cheaters, drug dealers, wanna be thugs and ex cons. Where's the Khadijah or Maxine Shaw type roles of black women, independent , entrepreneurs, proud & strong not loud, weak and willing to fight and accept anything a man offers just for companionship. Are we jesters again?

Take a look at your favorite shows that involve black characters and 90% of the time they involve, crime,drugs and promiscuity. The shows today are not indicative of how we truly are as a people and it's literally insulting to see the portrayal of my people this way everyday. Is there an underlying agenda? Has the media painted such a harsh picture of us that it's easy for police and or the society at large to racially profile and mistreat us? Have we played a part in our own demise?What can we do to change this? Can we have any effect? I believe the first step is to reject these roles, team up with other affluent blacks and create our own movies, shows etc. Perhaps they won't start out blockbusters but its a start and a step in the right direction for unity (which is seriously needed) and for our dignity.We also need to stop watching these programs which will force the programmers to take a step back, we are large in number it's time to start holding those that get our dollars accountable.

Final thoughts, self respect is paramount if we don't respect ourselves no one else will, it starts with us. We need structure in our homes and communities, a checks and balances system. We need to be vigilant protect ourselves and our families. It's time we rebuild the beauty which once was black and brown skin. Start by saying hello to your neighbor and kissing your kids before school in the morning. Black men and women try to understand each other and try hard to make relationships work through respect and love. Don't be so quick to hop from bed to bed to the contrary seek to build a lasting bond that your children can be proud to look up to and hopefully emulate. Finally we need to lose the mindset of just working a job and envision being bosses.